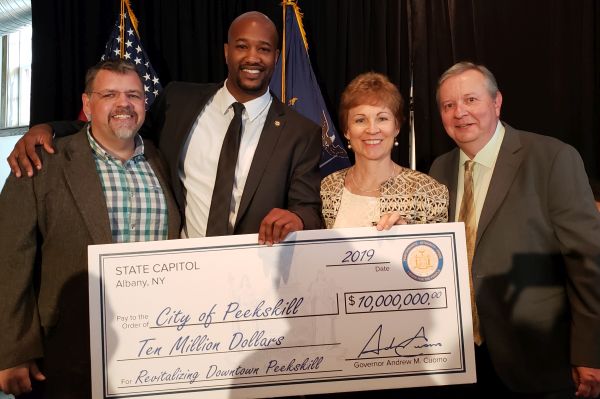 The City of Peekskill will receive up to $10 million in funding from New York state’s Downtown Revitalization Initiative (DRI). The grant will be used to revitalize its downtown and generate new opportunities for long-term growth while adding to the quality of life of residents and visitors.

The BID supported the city’s efforts from the outset with a letter of support included in the grant application and funding for the creation of a compelling video that ultimately became part of the city’s winning presentation.

“The BID is excited to work with our city and state partners in transforming Peekskill into the model 21st century city that residents and tourists alike can enjoy while paving the way for future generations to call Peekskill home,” Fassett said.

“Peekskill proposed a brilliant plan that builds on their natural resources including the beautiful waterfront – a magnet that draws people and businesses to the area,” Cuomo said

“And,” he added, “they demonstrated they have the secret ingredient: the capacity to actually get it done. This investment will help Peekskill utilize these assets to maximize their full potential.”

Peekskill Planning Director Jean Friedman spearheaded the city’s efforts in preparing and presenting the grant along with City Manager Richard Leins and her talented staff. Rainey, Leins, and Friedman made the in-person presentation in the final round of consideration.

“Thanks to Governor Cuomo’s Downtown Revitalization Initiative, our city has an opportunity to build on what we’ve accomplished and forge a great new future for our community. This investment will create lasting improvements that will attract more residents, prompt businesses to invest here and entice visitors to see what we have to offer,” said Peekskill Mayor Andre Rainey.

Mayor Rainey used the catchphrase developed by Enormous Creative (which has offices in downtown Peekskill) in the video they created for the winning presentation by saying, “Thank you for helping us get there. This DRI will ensure a more prosperous downtown for years to come.” In the video, community member after community member proposed an initiative and asked the state to “help us get there.”

In recognizing the importance of the grant, the BID’s board authorized funds to help produce the video and offered expert advice from the BID’s Executive Director, who is an Emmy-Nominated TV Producer and noted published writer.

Westchester County Executive George Latimer was also in attendance and praised Peekskill for what it has already accomplished.  Latimer has met several times with Board President Fassett and Executive Director Powers to determine ways to better link the downtown with the waterfront and discover easier, more convenient and more environmentally friendly ways for people to travel around Peekskill.

“Peekskill’s $10 million grant aligns perfectly with The Business Council of Westchester’s ongoing initiative to promote the revitalization of Westchester’s urban centers. I was honored to attend this important announcement that will transform downtown Peekskill into a vibrant urban center while adding economic vitality to Westchester County and the Hudson Valley region,” said Marsha Gordon, Business Council of Westchester’s President & CEO.  Gordon also serves on the Mid-Hudson Regional Economic Development Council and helped select Peekskill as this year’s recipient.

The city will now begin the process of developing a strategic investment plan.  A local planning committee made up of municipal representatives, community leaders, and other stakeholders will be formed to lead the effort with support from private sector experts and state planners. Plans will be completed in 2020.

Peekskill now joins the cities of Middletown, Kingston and New Rochelle, which were the Mid-Hudson winners in the first three DRI rounds, respectively.